Some works of this important artist are for sale thru this website.
For information please contact Nathan Zakheim at 213-840-9130 or nathan.zakheim@gmail.com.

Recently Nathan Zakheim, the son of San Francisco WPA muralist Bernard Zakheim (1898 – 1985), made an important discovery. He unearthed a box containing the original full-sized charcoal design for “The Library”, the mural created by Zakheim for Coit Tower, San Francisco in 1934.

The design consists of nine panels of charcoal drawings on paper. They comprise a rectangle approximately 10 feet high and 6 feet wide. The condition is excellent. Visual Transformation is presently seeking an appropriate permanent location for the public display of this historic work of art.

Fred Rosenbaum in his 2009 book Cosmopolitans states, “Bernard Zakheim was at the center of the greatest controversy over public art in the City’s history. In the combative context of July 1934, the Coit Tower murals led to a ‘grudge’ match, as one journalist wrote, ‘between Kid Capital and Kayo Communism’. Three artists, John Langley Howard, Clifford Wight and Zakheim, all members of the Communist Party, were singled out in the press for having ‘indulged in a little Communist propaganda, and at the expense of the U.S. government’.”

Like other artists, Zakheim populated his Coit Tower mural with the faces of the people he knew. In his depiction of the San Francisco Library Periodical Room, artist Ralph Stackpole reads a newspaper headline concerning the destruction of the Diego Rivera 1933 mural at the Rockefeller Center in New York City. Local sculptor Beniamino Bufano is depicted reading the headline "Bennie Bufano's, St. Francis Just Around the Corner; Art Commission Awakens from Deep Sleep". Colonel Harold Mack, member of the Washington appointed supervisory committee for the mural installations, is pictured with thumbs in his vest, looking on as artist John Langley Howard holds a crumpled newspaper while reaching for Marx's "Das Kapital". Kenneth Rexroth, then a young poet, is shown on the library ladder.

Visual Transformation Gallery, located in Oakland, CA, represents artists and the owners of collections seeking appropriate placement of their works of art. The Director, Albert Neiman is a long-time authority on the work of Zakheim. For more information, email vtgallery@gmail.com. 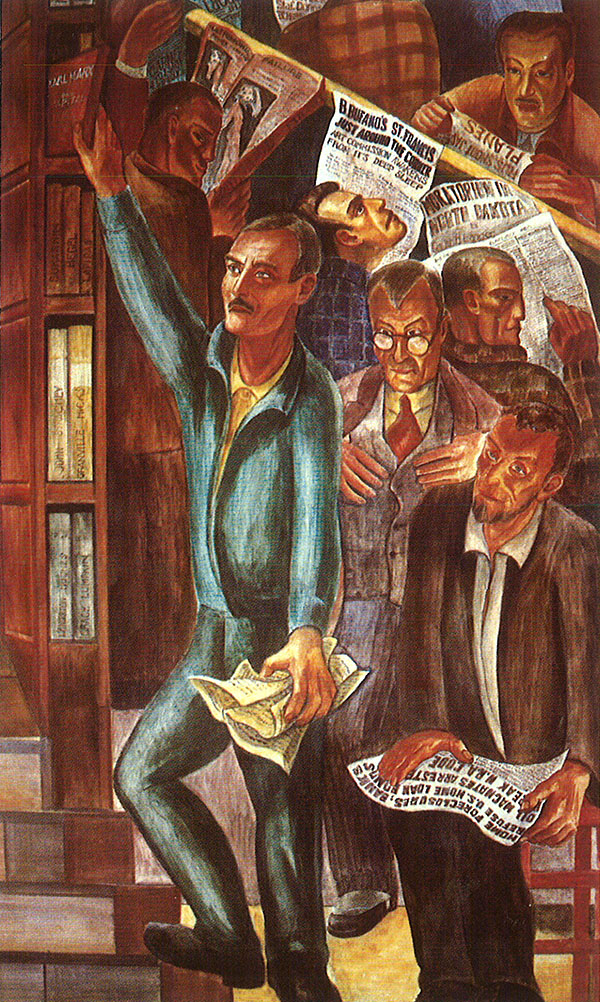 Zakheim: The Art of Prophetic Justice

Some works of this important artist are for sale thru this website.
For information please contact Nathan Zakheim at 213-840-9130 or nathan.zakheim@gmail.com.